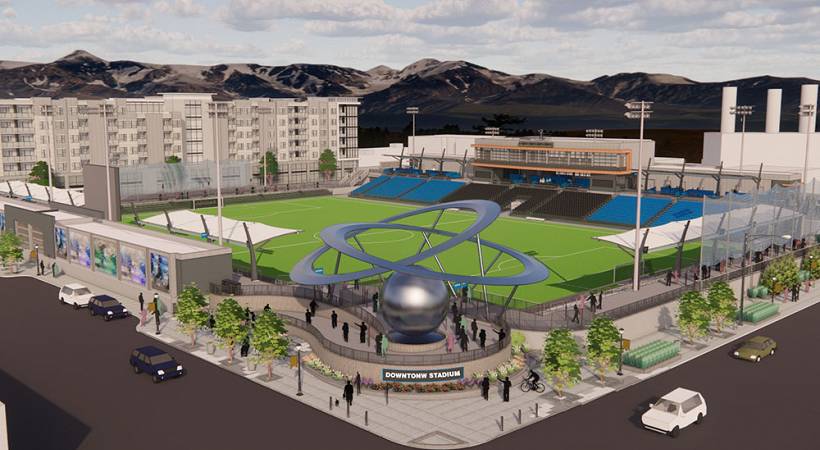 Posted at 13:53h in News by Bryan Hoffman 0 Comments
0 Likes

Construction of the new Weidner Field, home of the Colorado Springs Switchbacks has been completed. SprinTurf was selected to partner with the club to install the new synthetic turf soccer field.  The entire SprinTurf team was very excited to work with the Switchback Football Club and its President (Nick Ragain) to complete the installation of their new synthetic turf soccer field.

The official attendance of the home opener was about 5,600 which was about 70% of the new stadiums capacity. SprinTurf was thrilled to provide a very unique type of turf system to the Switchbacks. The Switchbacks head coach Brendan Burke stated “the field plays much better than  a standard synthetic turf field, which uses infill material such as crumb rubber.” Coach Burke is specifically referencing the proprietary infill system that SprinTurf integrated into the new synthetic turf soccer field at Weidner Stadium.

See all of the Grand Opening festivities in the below video:

Jimmy Ockford #15 on the Switchbacks and the Team Captain had this to say about his first time playing on the new field:
“It is amazing and the new turf was well put together…the surface plays very well.”

This was a major project for the SprinTurf team and we were thrilled to work with such an exceptional club.  The level of involvement and collaboration from multiple entities made this a unique experience. Additionally, one of the most unique aspects of this synthetic turf soccer field was the infill that was included at Weidner Field. Before the installation the infill had to undergo extensive performance testing in Europe for over 120 days. The “Corkonut” infill used is USDA Certified Organic and meets FIFA Quality and FIFA Quality Pro field performance criteria. SprinTurf’s synthetic turf system had to fulfil the quality requirements necessary for soccer in terms of playing performance, safety, durability, and quality assurance. Some of the items that were measured during the testing included interaction between the player and the surface, as well as seam strength, service life, weather resistance, and product composition. 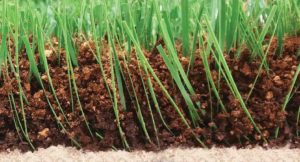 The infill material itself is a naturally blended coconut & cork combination that enhances overall player safety by providing grass-like turf field temperatures. Additionally, the installed system at Weidner Field offers performance and safety that helps to reduce the incidence of injuries, concussions, and abrasions. Athletes have praised this system due to the fact that it enhances foot stability, rotational resistance, and energy restitution. Jordan Buke who is a defender on the Switchbacks team stated, “compared to regular turf its night and day, the ball rolls perfectly,  and it feels good on your body. When you come to training its a pleasure because this turf plays like a grass field.”

Along with being the home of the Switchbacks; Weidner Field will also be playing host to the Colorado High School Activities Association (CHSAA) Boys Soccer Championship Games.  Justin Saylor who is the administrator for CHSAA soccer says that this will be “a great opportunity to take their event to a world class facility like Weidner Field.” The same SprinTurf proprietary turf and infill system will also been installed at Colorado College (Stewart Field) and soon at Panorama Park outside of Colorado Springs. The SprinTurf Team is excited for the Grand Opening of Weidner Field and look forward to all of the amazing events that it will play host to in the upcoming years. Go Switchbacks!

About Sprinturf, LLC: Sprinturf is a national synthetic turf company headquartered in South Carolina with fiber and turf manufacturing facilities in Alabama and Georgia. Starting with the resin pellet and ending with the installed field, Sprinturf is a one-stop shop for synthetic turf fields. Sprinturf has been in business since 1998 with over 2,000 turf field installations throughout North America. Sprinturf is committed to U.S. investments and jobs with one hundred percent of their jobs and investment in the United States.